Review of Song by Jesse Teller

I received a review copy of Song by Jesse Teller in exchange for an honest review. This is the first book in The Manhunters series, which takes place in Teller’s fantasy world Perilisc, a world resplendent with lore, history, magic, and mystery.

This was my first venture into the works of Jesse Teller, and I was very impressed by both the scope and depth of this story.

END_OF_DOCUMENT_TOKEN_TO_BE_REPLACED 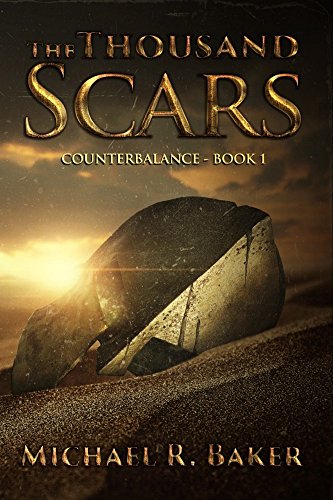 Counterbalance tells the brutal story of a land in turmoil, as two desperate superpowers battle for survival in a war of terror and clashes of morality.

For good or evil, The Thousand Scars shall bleed the world…and they will save it. Or will they? The first book of the series released on December 9th, the opening book of this epic fantasy series.

END_OF_DOCUMENT_TOKEN_TO_BE_REPLACED

To be caught practicing Magic and not being admitted to the College is a death sentence.

END_OF_DOCUMENT_TOKEN_TO_BE_REPLACED

Serpent King: Shadow and Light follows the origins of Zian Ur, a Reptilian born into a noble military family in the Nagan Empire.

While he proves to be a natural warrior, strong and crafty in combat, Zian intimidates and terrifies other Reptilians for reasons neither they nor he can understand. As the novel continues, we learn what makes Zian different from his own people.

END_OF_DOCUMENT_TOKEN_TO_BE_REPLACED

A gruesome discovery in a ladies’ boarding house is just the start. What is the secret worth killing for in the Horniman Museum? What drove the under-gardener insane? When is a beetle not a beetle? Mysteries and bodies pile up, and Harry will need his brains as well as his formidable fists to crack the case. Skinner, his cheerfully reckless partner is not to be trusted, and the alluring Miss De Vere is knowledgeable but dangerous…time is running out as the stars wheel towards a cataclysm that only Harry can prevent.

END_OF_DOCUMENT_TOKEN_TO_BE_REPLACED

Tell us about your novel.

I WAS A TEENAGE WEREDEER is a comedic urban fantasy novel about Jane Doe, an eighteen-year-old shapechanger who has the psychic ability to read objects. She lives a pretty normal life until her high school rival is found dead in the woods with her brother as the primary suspect. Teaming up with the victim’s sister, an eccentric FBI agent, and the local crime lord–Jane has to solve a case which seems closed before it even began. Jane is an irreverent and wonderful character which people seem to love. It’s very much in the style of my SUPERVILLAINY SAGA books and I hope fans of them will check her out.

I was originally inspired by the classic Twin Peaks story of the murder of Laura Palmer and how everyone in the town was affected. I decided to swerve my own way, though, by creating a town of supernaturals as well as modernizing the characters. Also, unlike David Lynch, I’m perfectly capable of creating a story where the metaphysics makes sense and the plot has a conclusion. Hehe. Just kidding. I love you, David. There’s a bit of Life is Strange and the Dresden Files plus Mercy Thompson too.

END_OF_DOCUMENT_TOKEN_TO_BE_REPLACED

The first chapter of any novel makes promises to the reader. The first chapter of Shattered Dreams by Ulff Lehmann promises that this will be a book where nothing is held sacred, that anything and anyone is fair game to ravage and defile. I’m not sure those promises held true throughout the whole of the book, but I did enjoy Shattered Dreams enormously – much better than I would have if the novel had ended as hopelessly as I’d feared it would.

I was happily surprised to find this a well-rendered story of tragic romance and a battered hero’s quest for redemption.

Enter the hero, Drangar Ralgon. Possibly a murderer. Possibly a victim. For most of the book, we’re left to wonder—all we know is that he thinks he killed his beloved some years before, an act which destroyed his life and set him on a path of self-destruction. If that wasn’t enough of a burden, this self-loathing warrior becomes the target of a series of brutal attacks that threaten to destroy him, body and soul.

This is a story that benefits from multiple story arcs, and Drangar’s is just one. We also meet two very strong female characters, the wizardess Ealisaid and the warrior Anne Cirrain. There is also a large and diverse supporting cast: priests, elves, sentient squirrels (whom I loved!), demons, demonologists – you get the idea. This is a richly populated world.

The only criticism I have is the story could have benefitted from a little more world building, but that I assume will be delivered in the sequel. Otherwise, the book flowed very well. It was well-edited and well-written, with a good pace and solid characterization. The main character’s physical and mental anguish drew me in and kept me flipping pages. There was a good amount of mystery built into the plot also served to keep the suspense elevated.

I would highly recommend Shattered dreams to adult fans of dark fantasy.

Review of I Was a Teenage Weredeer by C.T. Phipps and Michael Suttkus

I Was a Teenage Weredeer is a fantastic first installment of The Bright Falls Mysteries Series that I found positively deerlightful! I’m not usually a fan of Young Adult or Urban Fantasy, but this novel is truly a departure from the norm.

This is a story that transcends genre and plays on tropes, offering a rather cynical side of YA that I found to be refreshing.

Written in the same world as Phipps’ Straight Outta Fangton, Weredeer introduces a new protagonist in the form of Jane Doe (yes, you read that correctly). Jane seemed to be a lot like Bella from Twilight, only capable and likeable. She finds herself wrapped up in a murder mystery after her brother becomes a suspect, and finds herself teamed up with a mysterious FBI agent. Pop culture references fly like fouls at a AA ballgame.

I found Jane very easy to identify with due to her vast capacity for cynicism,  sarcasm, and a never-ending supply of teenage angst. The plot moves forward at a steady pace, keeping the pages turning.

Not only is the story very well-told, a variety of societal issues are addressed, making this a weightier read than your average YA novel. There is something for everyone between these pages.

In conclusion, I heartily recommend I Was a Teenage Weredeer to a Young Adult-Adult readership. My only suggestion is to make sure you block out a good amount of time for yourself before you begin this read, as you probably won’t be going anywhere until the last page is turned.

Purchase I Was a Teenage Weredeer on Amazon:

Warlock’s Sun Rising is the second book in the Broken Stone Chronicle series that started with the current SPFBO entrant Devil’s Night Dawning. This truly is epic dark fantasy that held my interest and was intriguing throughout. I’d summarize it as:

“The Exorcist meets Kingdom of Heaven”

I had a great experience reading Devil’s Night Dawning, so went into this book with high hopes. Thankfully, this story did not disappoint. This novel moved at a much quicker pace than the previous one, yet lost nothing of its enjoyability. Which means Warlock’s Sun Rising is even better than its highly enjoyable predecessor. It is much darker with the personal stakes being far greater for the characters. The plot is unapologetically brave, going places some readers may find unpalatable. So, let this be a word of warning: this is not a book for the squeamish. Any novel that starts off with execution and rape in the first chapter is going to command your attention, although the following action could divide readers of the genre.

Warlock’s Sun Rising begins with Adelko and his master Horskram hunting the powerful warlock Andragorix. As it turns out, there is an even more despicable evil at work. We get to see characters from the previous book’s various story arcs finally brought together as the larger plot unfolds. And then, towards the end, it appears the plot threads are destined to separate once again…

There’s so much to discuss when it comes to this analyzing this novel. The most striking element though is the writing, which is spectacular. Damien Black is not only a consummate writer, he is also a medieval historian, who is unafraid of using the language of the period to season his prose. The reader is submerged in the world, delivered on a tide of text that achieves setting with syntax.

The novel is also notable for its compelling religious system, which is very much based on crusader-era Christianity, but tweaked in clever ways. Anyone with a knowledge of this period, the militant orders, and medieval concepts of chivalry, will give a nod of appreciation. I greatly appreciated the way religious constructs are called into question and offered up on the dissecting table.

The magic system is unique; it reminds me of isomers in chemistry, with a left-hand and right-handed path. The way the moral ambiguity of the novel’s religious concepts spills over into Black’s magic system is highly engaging.

To conclude, I am extremely excited to see what happens next for these characters and how their destinies may change their overall world-views. For fantasy book fans who like to exercise their minds and truly lose themselves in a story, I cannot recommend this enough.

An utterly unique and enthralling dark fantasy tale which I’ll be thinking about until the next entrant in Black’s series arrives.